The story of Iraq’s climate and environmental crisis is one of many layers, each generational challenge compounded by another. We wanted to use the iconic (and delicious) Basra Date Syrup jar as a starting point from which to explore the legacies of palm groves among other issues in the soil, water and air. But we also wanted to simultaneously rewind and fast forward – to relish in the abundance that Iraq once had and the joyous moments that we hope will return. 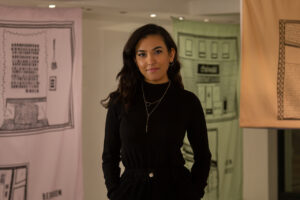 Alaa Alsaraji is a London-based visual artist, designer and creative facilitator. Through her creative practice she aims to explore themes such as belonging, reimagining space and community and the impacts of Islamophobia in British society, predominately using the medium of digital illustration. She also works with various creative and educational organisations and collectives as a facilitator, delivering creative workshops with children and women’s groups. In her work she always seeks to emphasise the value of using creativity as a pedagogical process to address and explore structural issues  and their impact on individuals and communities.

Alaa is also the arts editor of Khidr Collective, a multidisciplinary artist collective creating platforms and spaces for young Muslim creatives through the annual Khidr Zine and online platform. 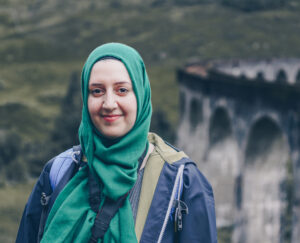 Zainab Rahim is a writer and editor. She works for a legal charity called RAID, holding corporations to account for human rights abuse and environmental damage. She has recently completed an MA in Postcolonial Culture & Global Policy.

Alongside this, Zainab is the non-fiction editor of @KhidrCollective’s annual zine and has contributed to their newest issue, WATER. She is also the editor-in-chief of a commentary website called The Platform (@YourPlatformUK) seeking to share marginalised stories.

Zainab enjoys archives and photography, as well as feature writing, and hopes to continue developing her skills in these areas. Her review of television drama Baghdad Central was published in Issue 36 of Critical Muslim by Hurst Publishers. Follow her @zainoted.