Our friends at the Arab British Centre and SAFAR Film Festival are running an exciting development workshop in early 2021.

In collaboration with the SAFAR Film Festival and Liverpool Arab Arts Festival, Palestinian filmmaker Saeed Taji Farouky will lead a free two-day project development workshop on 16 and 17 January 2021 for up to six, UK-based early career Arab filmmakers (or filmmakers working on projects connected to or inspired by the Arab world.) Applicants must apply with a film idea in mind, but it can be anything from an initial outline on paper to an early script. You don’t need to have a fully developed idea, you just need the enthusiasm and openness to work with others on developing your story.

During the two-day workshop, we’ll discuss each project in detail and develop the film’s narrative, possibilities for funding, and explore options for distribution. The sessions will be intensive, collaborative, and confidential, so you’ll need a willingness to share ideas and foster a supportive environment. There will also be a follow-up session planned at the end of March to follow-up on your project’s progress, exact date to be confirmed shortly.

Any type of film – documentary, fiction, and everything in between – and any length is eligible. We define an early-career filmmaker as anyone from a complete beginner working on their first film, to someone who has made any number of short films but no more than one feature-length film.

We’ve tried to make the applications as simple and straight-forward as possible. Just answer a short series of questions about your filmmaking, and submit a short (1000 word maximum) synopsis of your film idea. Applications should be submitted in English, and the workshops will be held in English.

Participants will be selected by The Arab British Centre and workshop facilitator Saeed Taji Farouky. The selection process will ensure inclusion from underrepresented groups in the film industry and consider; income level, sex, sexuality, gender, race and ability. Applications will be accepted from filmmakers based anywhere in the UK however priority will be given to filmmakers based outside of London (due to the previous London opportunity). Applicants who applied for the previous workshop are welcome to apply again.

The workshop is free for all participants.

ABOUT THE WORKSHOP FACILITATOR

Saeed Taji Farouky is a Palestinian-British filmmaker who has been producing documentary and fiction work around themes of conflict, human rights and colonialism since 1998. His latest documentary, Tell Spring Not to Come This Year, premiered at Berlinale 2015 where it won the Audience Choice Panorama award and Amnesty International Human Rights Award. It was selected for over 40 international film festivals and awarded Best Documentary 4 times. It was bought by Netflix and received a theatrical release in the UK where The Guardian gave it a 4 star review and described as “a powerful, beautifully shot documentary.”

His first short fiction They Live in Forests, They Are Extremely Shy (2016) was broadcast on Channel 4’s Random Acts, and won Best Short Drama at the Royal Television Society Awards (North East and Boarder). His following short fiction Strange Cities Are Familiar (2019) has been selected for 18 international festivals, winning Best Short Film twice.

He is the designer and lead tutor of the radical Re:Creative film school, a free alternative film course supporting people from backgrounds underrepresented in the industry and dedicated to developing a new generation of creative and engaged moving image artists.

We’re thrilled to be this week’s guests for The Arab British Centre’s excellent Friday Hangout series. 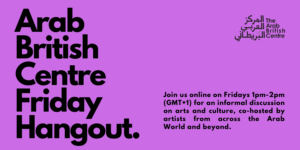 Join us at our fifth Friday Hangout, this time co-hosted by Liverpool Arab Arts Festival!

Our Friday Hangout series brings together people interested in Arab culture for an online chat over their lunch breaks, wherever they may be currently ‘locked down’. Five weeks in, we’re delighted that so many people have taken part in our informal sessions, all inspired by our team missing our lunch-time conversations whilst working from home.

This Friday, we’ll be joined by some of the wonderful people behind Liverpool Arab Arts Festival (LAAF), who this week announced that they will be moving their annual festival online in light of the Covid-19 crisis. We’ll be chatting to Festival Manager Jack Welsh, who is leading their online transition, as well as dancer Jamila Boughelaf, dancer and co-founder of Hawiyya Dance Company, whose Dabke-inspired performance Curfew is one of the festival’s key events this year.

LAAF has been at the vanguard of Arab cultural programming in the UK for nearly 2 decades. Established in 2002, every July the festival brings a thrilling celebration of Arab culture to venues across Liverpool, showcasing a packed programme of visual art, music, dance, film, theatre, literature and special events.

Join us on Friday as we chat to Jack and Jamila about the unique challenges festivals and collectives are facing in the current circumstances, what ‘going digital’ actually means for large-scale creative programming, and more about Curfew and the work that the Hawiyya Dance Company is doing with the local community in Liverpool.