“What if the species and civilisations on other planets have established contact with one another, but refrained from reaching out to Earth because they consider us to be the least evolved planet in the galaxy?”

A duo of digital illustrations questioning our societally-imposed values and accepted attitudes towards consumption. 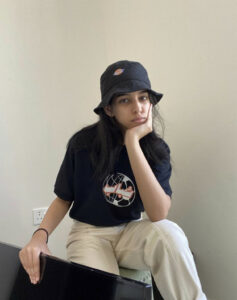 Tanya Shamil is a 19 year-old artist, also known as The Gluten Club. She started her career in the arts by creating and launching an app called “arabemoji” at the age of 13. Growing up, Tanya would spend hours glued to her comics. admiring their beauty as an entertaining outlet while also appreciating their impact youngsters. A year later she began creating and posting pop art that dealt with social issues. Her work carries influences from artists such as Roy Lichtenstein, Andy Warhol and Banksy. Tanya has been named one of the “7 Omani Artists on the Rise” by Oman Magazine, as well as one of the “9 Contemporary Artists who should be on your Cultural Radar” by the National News for her visual arts. She lives in Muscat.