Ecolo à Djibouti: Citizen action at the heart of the ecological transition

How Ecolo à Djibouti came into being

Some passions are difficult to articulate. They might make us happy, help us to bring comfort to others, and strengthen our bonds. As for me, I willingly inherited my passions from my father.

My father has been a teacher for most of his career. Passionate about education, he has always championed reading. My brothers, sisters and I spent our childhood immersed in a world of fairies, monsters, and adventures. As children, we would gather together before our afternoon nap – book in hand – to read. It was a moment of shared experience that, over many years, became a family ritual.

As a huge fan of Nicolas Hulot, Yann Arthus Bertrand and the National Geographic, my father also had a great love for nature, animals, and the great outdoors. So I got into the habit of watching documentaries with him; on the management of wildlife parks, the depths of the oceans, the rescue of Kenya’s last giraffes, how man lived side by side with large carnivores, the melting glaciers, the future of the forests, the impact of globalisation on our environment… So many documentaries which filled us with wonder, took us on journeys, explained complicated subjects in very simple ways, but above all ensured that we had a great time together as a family.

It was a passion which was passed on to us gently over time – never forced on us. Thanks to my family, my passion for literature and my interest in environmental issues have become part of my life. When the time came for me to choose my own profession it was therefore natural for me to become an engineer, specialising in energy and sustainable development. It is a job that has opened my eyes to many subjects such as sustainable development or renewable energies, and above all has reinforced my interest in ecology.

Today, this subject is an integral part of my life, even more so now that I have children of my own. I am trying, in my own small ways, to be more environmentally responsible in my behaviour. My desire to share my journey and all my thoughts around it gave birth to the idea for my blog, Ecolo à Djibouti.

There is a sense in Djibouti, and throughout Africa, that environmental conversations are confined to small circles, held in a rarefied air, and don’t reach the wider population. The idea behind the blog was therefore to reach the general public in a clear and simple way, and raise the awareness of one of the greatest challenges of the 21st century: how do we encourage respect for the environment? From information on sustainable development to tips on reducing waste, Ecolo à Djibouti aims to be easy to read and accessible for everyone. The most important thing is to provide reliable information to citizens of all ages. To arouse, perhaps, their curiosity and ecological conscience.

A collective movement begins with the individual

Ecology is an awareness of what surrounds us, of the fragility of the world we live in, and the urgent need to take care of it. Sharing information, therefore, becomes an important component to both educate and raise awareness of how to bring about real change in people’s perception of the environment. However, that unfortunately isn’t enough. In truth, an environmental awareness and ecological understanding cannot solely be based on the knowledge that life on planet earth is fragile. It must be accompanied by a change in the behavior of the whole society.

“We know that climate change is serious, but there is nothing we can do about it.”

It is futile for us to say we can do nothing to protect the environment because others are causing more damage. We have to act. Now. I’m convinced that we need to stop waiting for change to come from the outside, and instead start thinking about what we can do today. There is no such thing as small actions. Every action counts, and it all builds towards us reducing our impact on the environment. These small gestures, when put together, can make a big difference.

The movement in Djibouti was born as more and more people who were also sensitive to ecology and nature protection gradually expressed their desire to join the actions outlined in the blog. The ethos of my blog is to both unite and mobilise everyone with a stake in society. It encourages the emergence of collective action. It is a movement that also seeks to raise the profile of the work our fellow citizens are doing already. By reading the blog, people discover the numerous green initiatives launched in Djibouti every day, and the work being done to promote sustainable development. This gives us the opportunity to support them, be inspired by them, and to amplify their impact.

I think we must also pay special attention to young people, who are the key actors in tomorrow’s ecological transition. Environmental education has a great role to play in helping young people adopt eco-responsible behaviour now and work to preserve their environment. I regularly volunteer to give lessons in Djibouti high schools, an initiative we hope to expand to more schools throughout the movement. With this kind of training and education we can enable the young people to change both hearts and minds in the long term.

Making the voice of Africa, and Africans, heard

In Djibouti, as in the rest of Africa, citizen actions for the environment are being initiated and slowly implemented. They frequently come up against limits and difficulties which hinders their effectiveness; lack of legitimacy, of coordination and visibility, difficulty in extending projects. Yet they remain essential insofar as the ecological transition requires a collective response from all parties; governments, the private sector, civil society and the citizens themselves. It is therefore vital in African states that citizen participation is integrated into the framework of the public decision-making process if initiatives are to have a meaningful environmental impact.

In Africa, citizen actions will have a significant impact in raising public awareness. Too few people are currently aware of the environmental issues already affecting the continent and threatening its inhabitants. Many Africans, for example, know about the devastating forest fires in the Amazon, but few know about the millions of hectares of forest disappearing each year in the Congo Basin. With better access to information, people will be able to reclaim and better preserve their natural resources.

Yet if little space is given to the discussion of environmental issues by governments at home in Africa, it is worse on the international stage where Africa and the most affected indigenous communities are being ignored. These vulnerable populations, who are on the frontline of the climate crisis, rarely make headlines around the world. In August 2021, the Western media was focused on flooding in Southern Germany and Belgium, while the deadly floods in the Niger received little coverage.

This lack of coverage extends further, to the visibility of African activists who struggle to find a platform to express themselves. This is not for their lack of initiatives to tackle global warming. Rather, African voices carry less weight at global environmental summits. The media treatment of the young Ugandan activist Vanessa Nakate is the perfect example. Almost two years after she was first cropped out a photo with Greta Thunberg, Nakate was once again cropped out of a photo with the Swedish activist at COP26. The erasure of Africa in the climate debate is part of a systemic conversation that frames the climate crisis as a “white people’s problem” and consistently devalues the voice of Black people.

But who is already amplifying their voices in their own countries?

As well as being excluded from the global media, African activists are less represented in global warming debates because they face more barriers to participation than their peers. There is limited funding, a lack of accreditation and, above all, a lack of support from their home countries – all of which limit the participation of young people most exposed to the impact of the climate crisis. African nations often lack the capacity to negotiate on an equal footing with their partners in the Global North. What can they do?

First and foremost it is about empowering citizens with all the necessary tools to understand and act in favour of their environment. The policies and actions of the government have to rely on citizen engagement in order to enact the ecological transition. Then, they will be better placed to demand climate justice from countries in the Global North who have not yet honoured their pledges in the Paris climate agreement. They may even be able to influence environmental policy decision making on the international stage.

Will this be enough to change the playing field? One thing is for certain; if we don’t try, we won’t succeed! 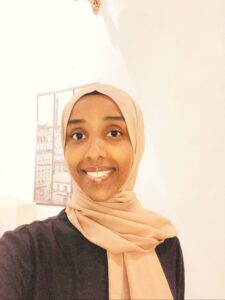 Amina Idan Paul is an Engineer in energy and sustainable development for the Ministry of Energy in charge of Natural Resources in Djibouti. Her work consists in the design and management of innovative solutions to reduce energy consumption. That led her to work on projects related to wind power, photovoltaics and biomass.

Very sensitive to ecology, Amina is an environmental activist, a blogger, and the founder of an environmental movement called Ecolo à Djibouti. Through these initiatives, she wants to raise awareness about environmental issues and the importance of changing our attitude towards nature.

In 2021, she was appointed as an Earth Champion, charged with leading the way in the construction of Africa by IGAD-ICPAC.