The celebratory Family Day, the showcase of Liverpool Arab Arts Festival, returns to Sefton Park’s Palm House after a two-year break. Traditionally held on the final Sunday of the festival, the Family Day is an opportunity for everyone to come together.

A free, all day celebration of Arab art, culture and community in the heart of Liverpool the Family Day brings music and performance to the Palm House, along with a series of stalls including Arabic and Middle Eastern food, craft, traditional practices like calligraphy and activities focused on children, like storytelling.

In 2022, marking 20 years since the first Liverpool Arab Arts Festival was held in the city, the Family Day will see the return of Hawiyya Dance Company, who bring their unique blend of Dabke and contemporary dance. Live music performances will celebrate the best of modern and traditional Arab music from across the Arab world.

LAAF is extremely grateful to Al-Omar Family and Unison for supporting our Family Day.

Running Order (Times may be subject to change): 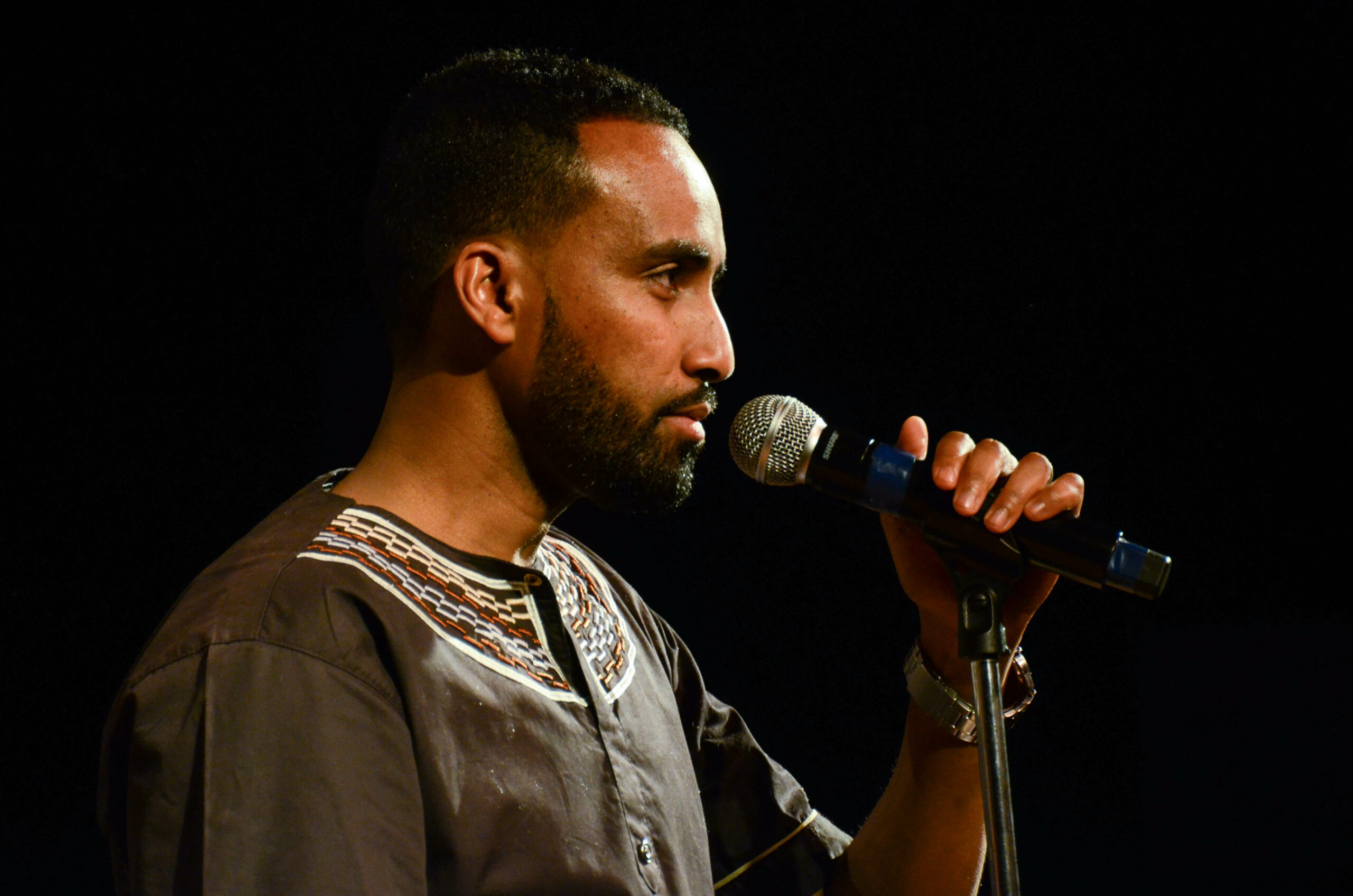 Making his first visit to Liverpool Arab Arts Festival, Aar Manta is a British-Somali musician whose activism, work and creativity has led him to be both a goodwill ambassador for the UNHCR, championing refugees, while leading one of the only active touring bands in the world playing live Somali music.

As a singer and songwriter, Aar Maanta has embraced an eclectic mix of styles, with rock and reggae rubbing shoulders with traditional Arabic and Somali music. His 2009 debut album, Hiddo & Dhaqan merged a traditional sound with western influences like house and reggae with the fusion described as Afro-hop. In 2018 – 2019 Aar Maanta was artist in residence of The Cedar Cultural Center, a premier world music venue in Minnesota USA. Aar Maanta with Somali children from Minneapolis’ Cedar Riverside neighbourhood were able to record his latest album ‘Ubadkaa Mudnaanta Leh’ (Children Have Priority,) the first bilingual Somali-English children album came out late 2021. 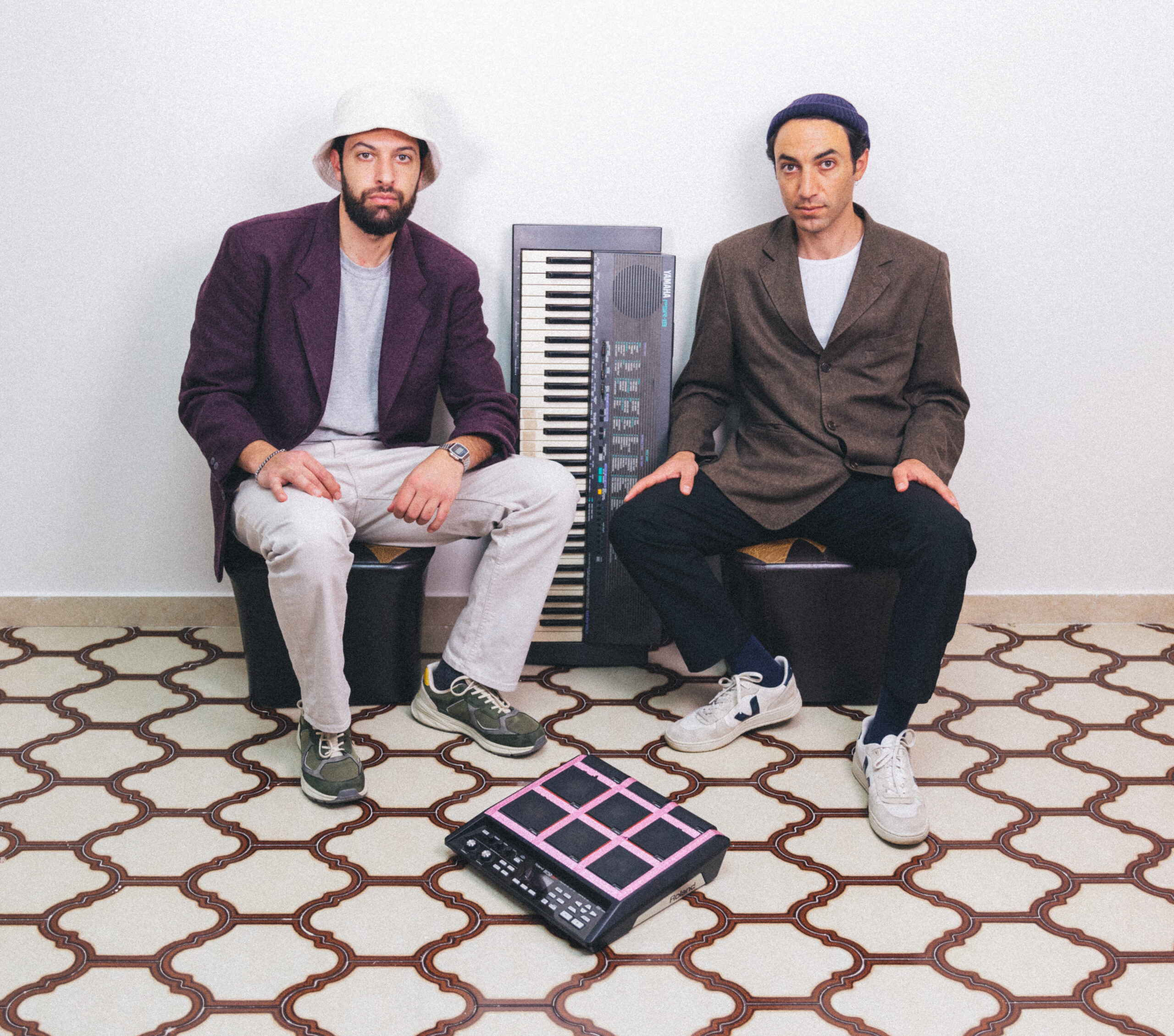 A trailblazing duo from the Golan heights, the Nakhleh brothers return to Liverpool with a new album and a new sound.

TootArd’s 2020 album, Migrant Birds, is inspired by the pioneering musicians that electrified contemporary Arabic music with synthesizers and electric guitars. The core idea of the album is based on a simple idea – freedom. Born in the occupied Golan heights on the Syrian border, the brothers have never had a passport, instead relying on a document to travel. The freedom to be a Migrant Bird that can fly away might be easy for some, but for those who are ‘undefined’ it can be much more of a challenge.

With a captivating new sound and an homage to 80s, TootArd come to Family Day ready to make the dancefloor move. 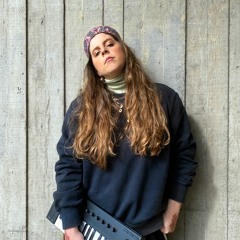 Saliah is a competition winning British-Lebanese DJ and evolving EDM producer. Renowned for her unique blends of acapellas, UK Bass, popular Arabic grooves, and ground-shaking electronic Arabesque. Saliah’s curated selection and stage presence is guaranteed to bring the energy that draws in the crowds. 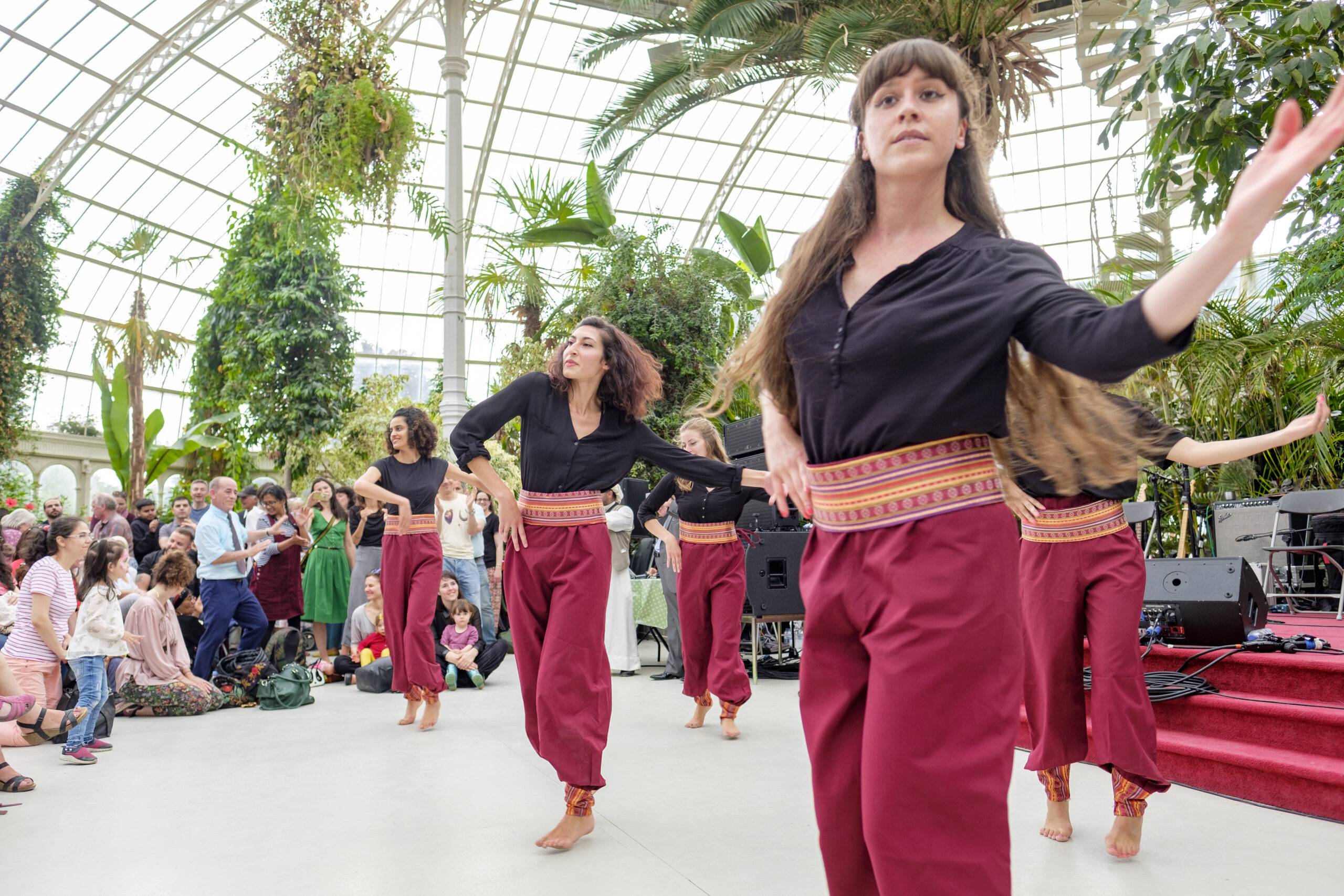 The members of Hawiyya are from diverse backgrounds and nationalities, and have experience in different forms and styles of dance training. The dancers unite in their commitment to anti-racism and anti-imperialism in all they do. The aim of the company is to empower people, especially women, to build community, to raise awareness of human rights and to demonstrate solidarity to the causes they support through dance and culture. 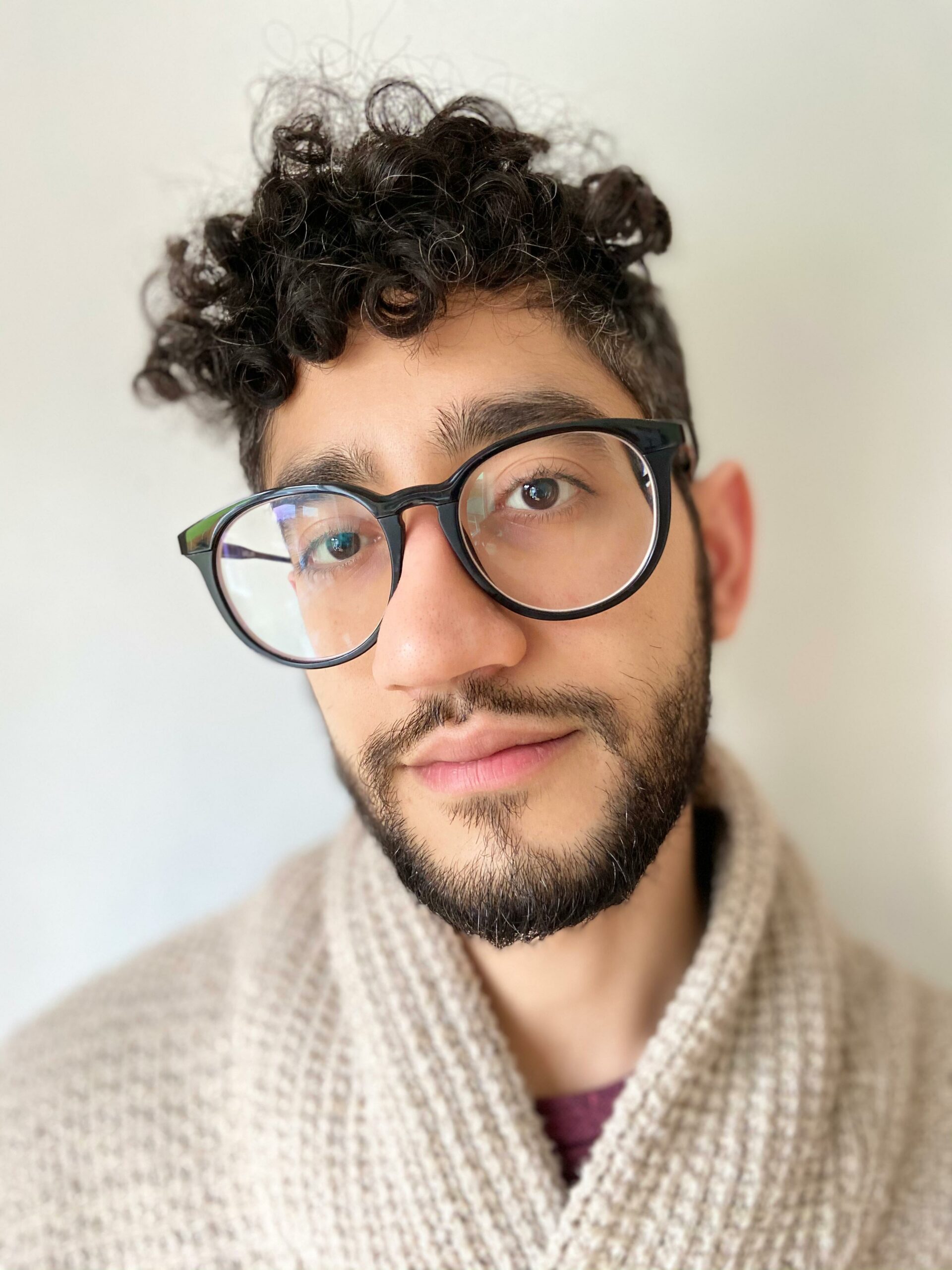 Poet Ali Al-Jamri has been holding workshops in Manchester and Liverpool in 2022. For Family Day Ali brings a Doll House that is typical Arab house featuring the children’s work. It will be displayed at the Liverpool Arab Arts Festival’s Family Day on 17 July, where children can see the result of their creativity and continue to add to it.

Ali Al-Jamri is one of Manchester’s three Multilingual City Poets, a teacher and translator. In 2021, he published ‘Between Two Islands’ and guest edited ‘ArabLit Quarterly: FOLK’. The Liverpool Arab Arts Festival is the longest-running festival of its kind in the UK and this year’s theme is on ‘Connections’. Manchester UNESCO City of Literature is an organisation with a vision to create an innovative, distinctive, equitable, globally connected city of reading and writing. 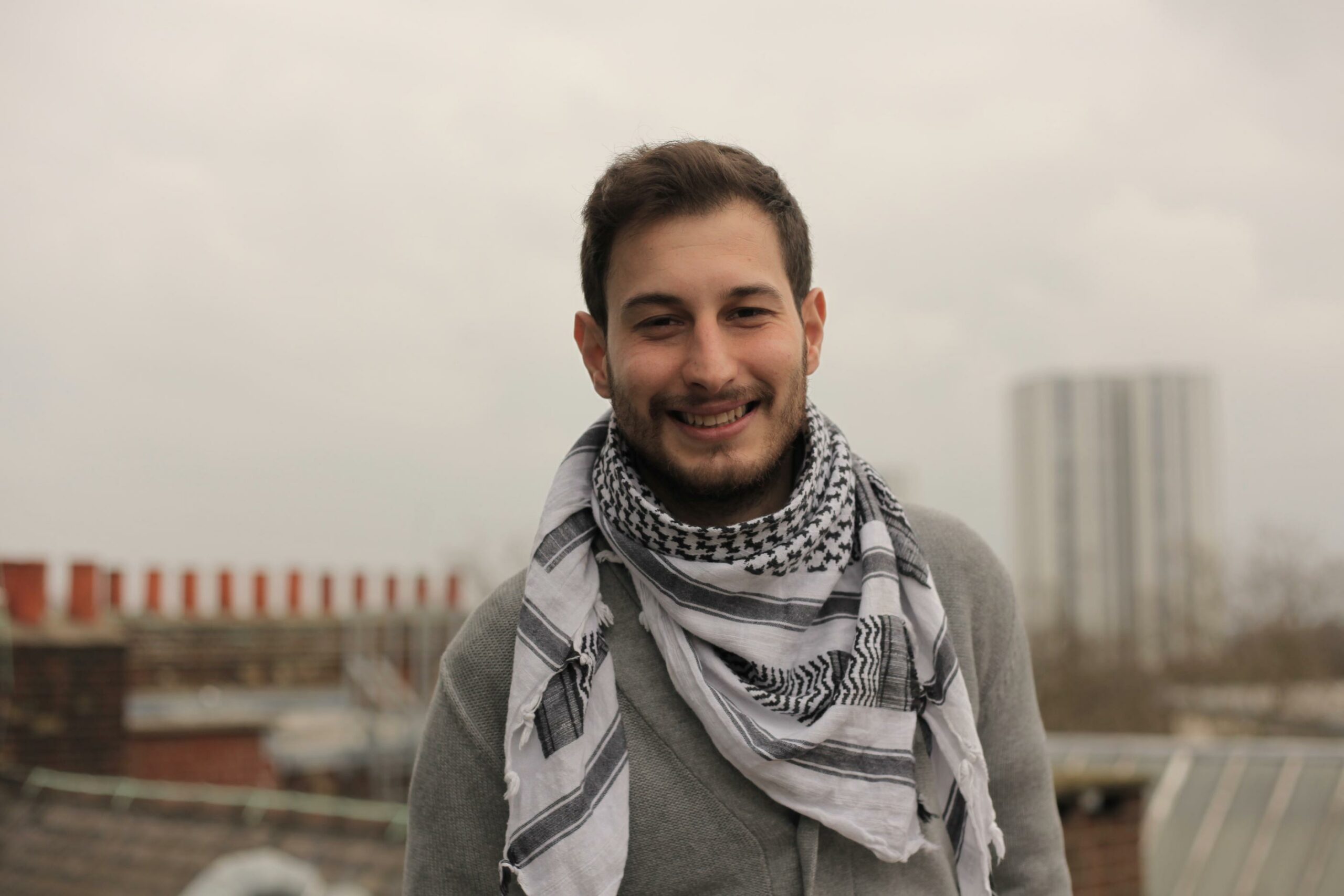 Elias Matar will be performing interactive storytelling sessions for Family Day. Join Elias as he takes us on a journey across borders, walls, and time. Encountering mythical creatures and fairy tale characters along the way. Great for all ages – a chance to discover the secrets, magic, and joy of live storytelling.

Elias Matar is a Palestinian play specialist, drama therapist, workshop facilitator, performer, and a storyteller. Elias holds an MA in Drama and Movement Therapy from the Royal Central School of Speech and Drama in London. 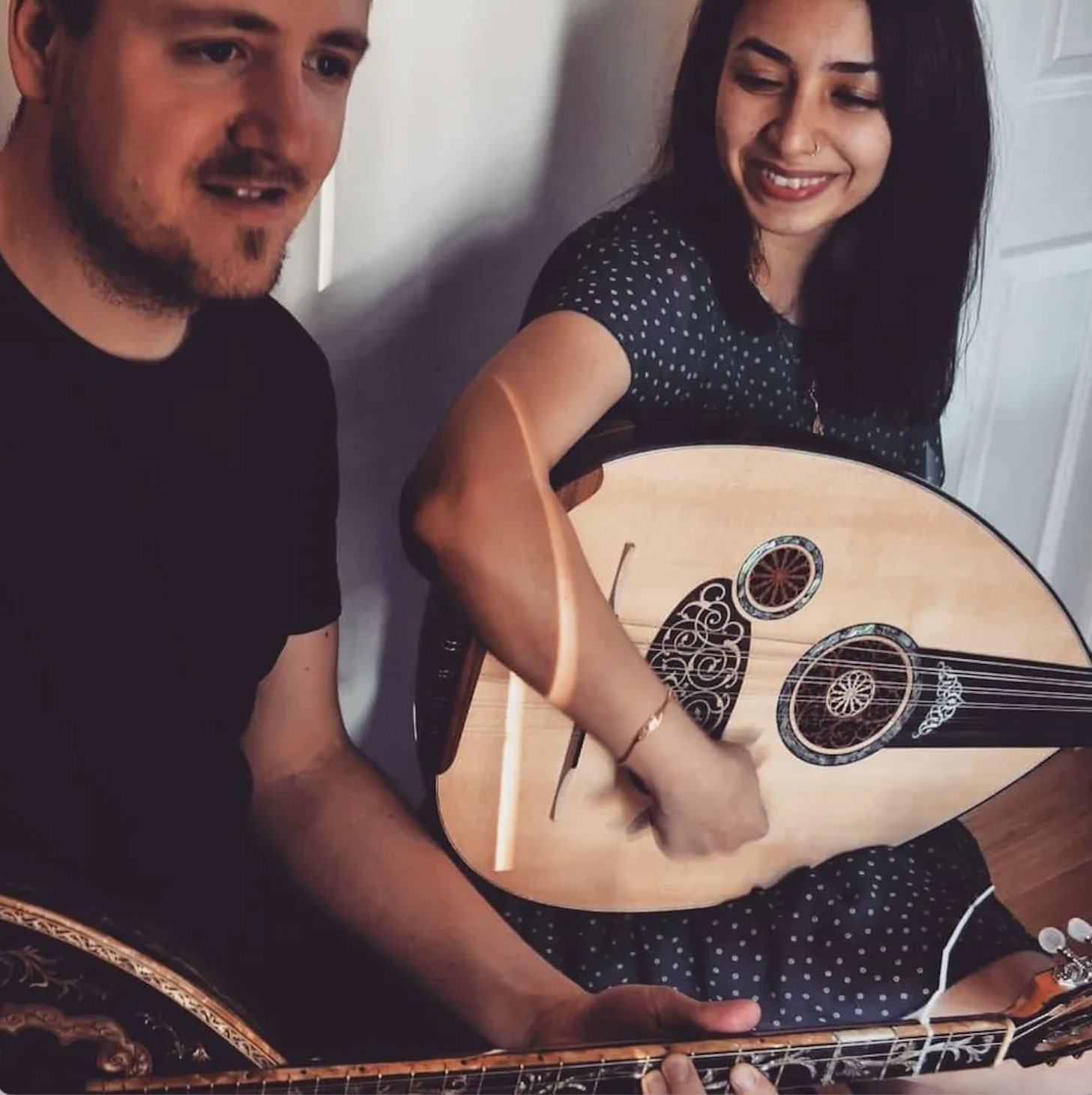 Formed by a duo of Palestinian oud player and music therapist Reem Anbar, with writer and musician Dr Louis Brehony, Gazelleband brings the modern traditions of the Middle East to the wider world. Based in Manchester, Britain, and the band’s work includes concerts, guest lectures, masterclasses and workshops. 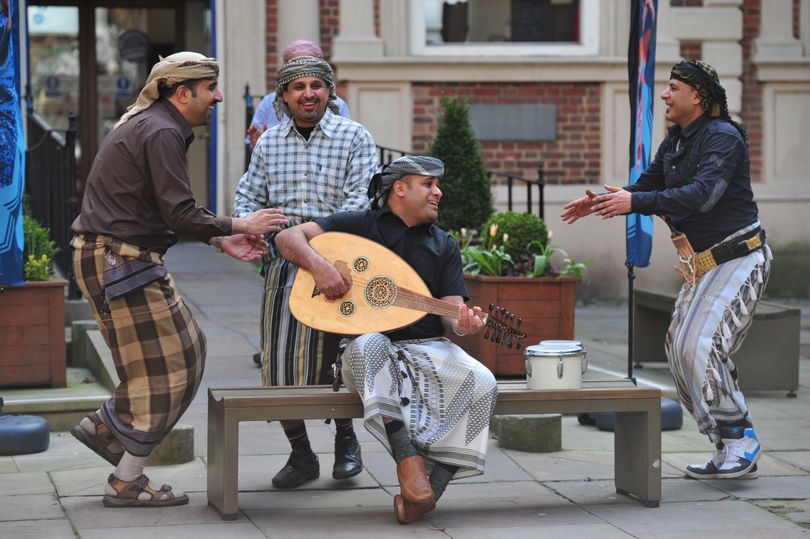 Image: Al Awadhel Band perform in the main courtyard at the Bluecoat. Courtesy of James Maloney.

House of Memories, the award-winning dementia awareness programme from National Museums Liverpool, will present Memories of Yemen – a digital first for the UK. This landmark new package on the ever popular My House of Memories app is specifically designed for those living with dementia within the Yemeni community to connect with their heritage through artefacts, stories, traditions and images collated by others within the community.

House of Memories On The Road, National Museums Liverpool‘s new touring 30 metre square mobile museum that opens up into an immersive cinema and activity space, will also be available to explore at Family Day. The first-ever immersive mobile museum experience in the UK, it has been designed to create memorable experiences for vulnerable and socially isolated people and people living with dementia. 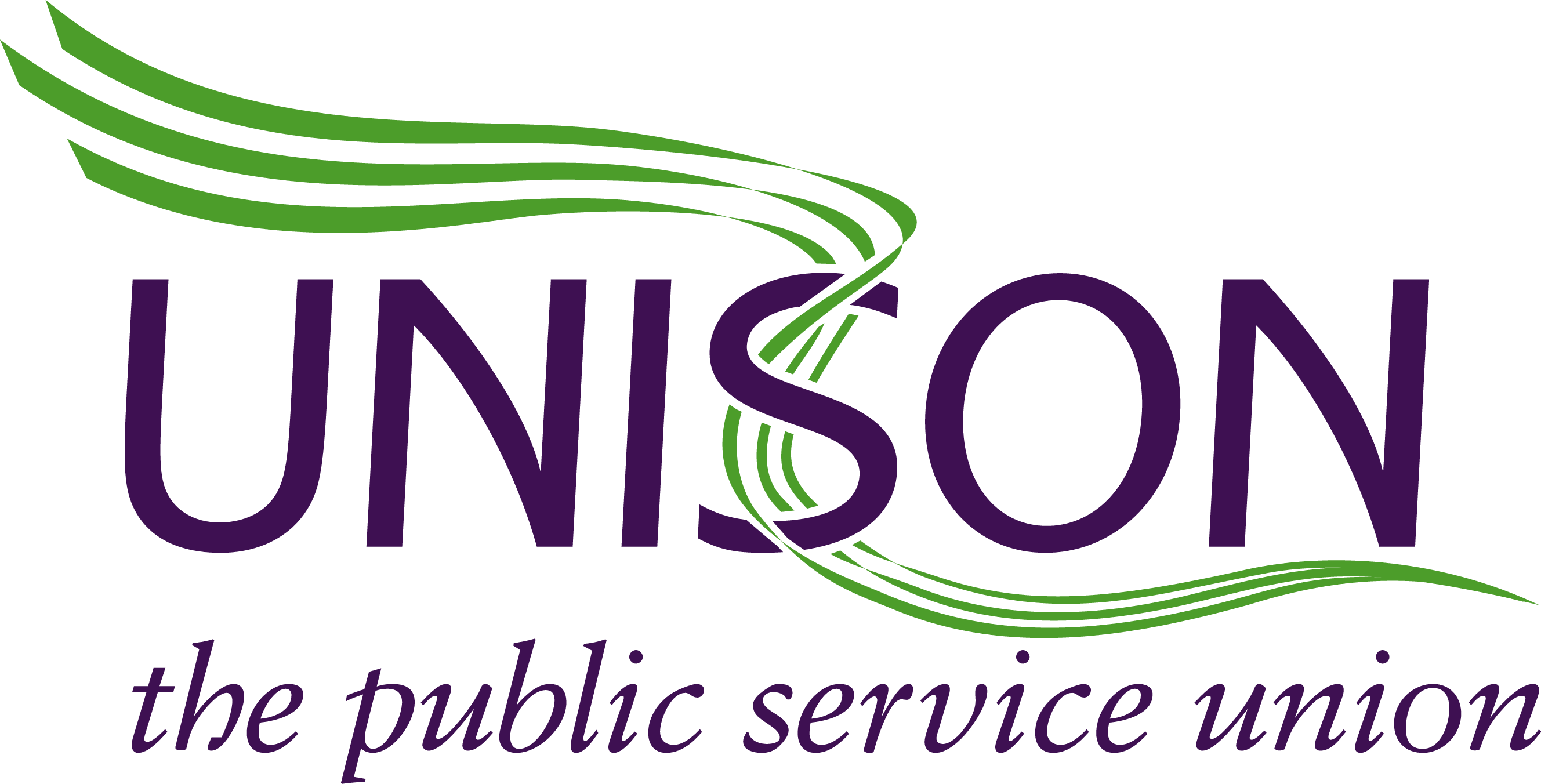 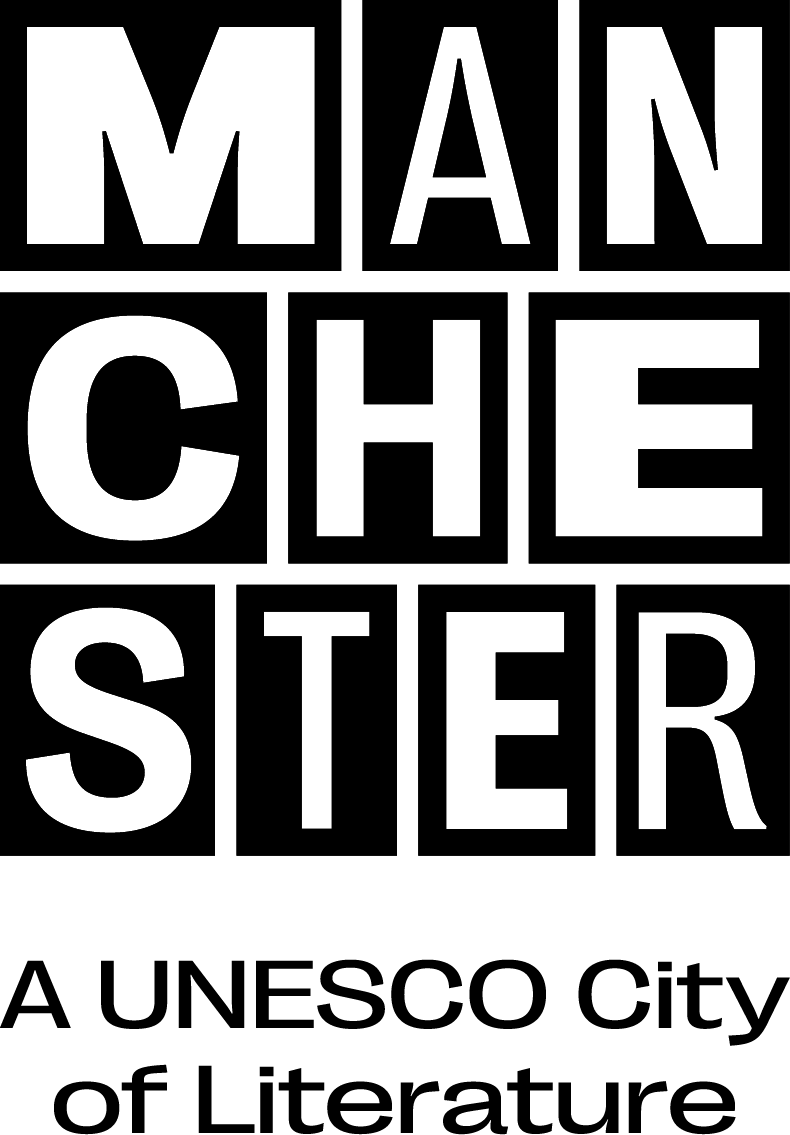 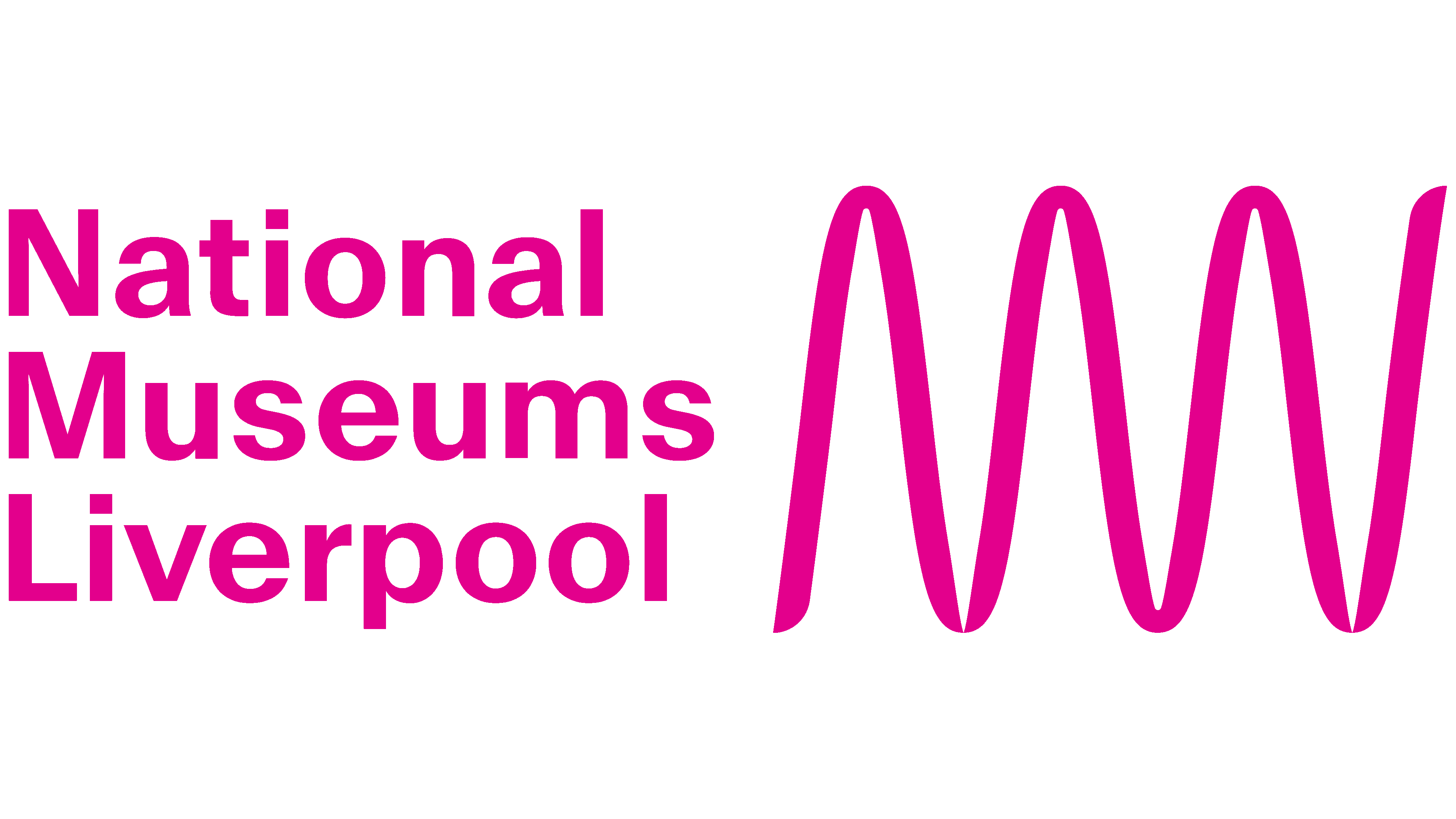