In the face of a poisoned sky

And a sea sometimes dying and sometimes resisting

Some of whom curse the train,

Others have no choice but to bow their heads

A journey – captured in one take – that goes back along part of the phosphate road to the city of Gabès, located in the southeast of Tunisia. Gabès is unique in that it is both an oasis and a seaport overlooking the Mediterranean.

Since its establishment in the 1970s, the chemical complex has caused environmental damage to the city of Gabès, where phosphate is processed for export to Europe. Every day the complex pours tonnes of its toxic waste into the sea by the city’s bay. 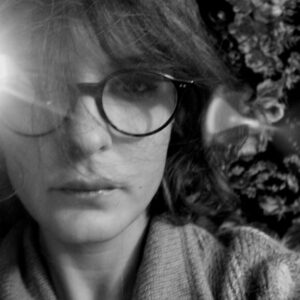 Intissar Belaid is a filmmaker and visual artist based in Tunisia. She explores different techniques in the fields of cinema and arts. Her work revolves around tackling concepts like perception and time, human and nonhuman history, as well as collective and individual memory, through an artistic approach that adopts divergent points of view.
000
Intissar investigates a variety of disciplines in order to question a generation in relation to its memory in a current socio-political context. Through this questioning, she traces what remains of an event, an era, a history.